As energetic beings, we are constantly navigating the external world, striving for centeredness within our internal world. Just like we drive around in our cars nearly all of the time without incident and sometimes an event totals the car, a life event can total our well-being. For me, the life event happened at 10:30 at night in April, when I received a phone call that my beloved had been struck on his motorcycle – and had not been wearing a helmet. I first became numb, then flew into responsibility overdrive. I made all the phone calls, contacting his work, letting them know he wouldn’t be there, and promising to update them when I knew more. I called family and had his brother on his way to the hospital right behind me. My only focus was seeing my partner, and witnessing that he was going to be ok with my own two eyes. The 10 days that followed are a blur of self-neglect and constant worry. This event had shattered my centeredness. And I paid the consequences for not getting it back into check right away.

I’m not going to spend time in this blog discussing how we attract experiences to ourselves. I do believe this to be true, but in painful times, that’s not helpful. I want this to be a post about hope! And assigning responsibility, while useful in self-growth, is not something that is particularly helpful while you’re going through something big. We can discuss all that at another time. But right now, I want you to see that hope is the small catalyst that can get you unstuck from the shock and fear and destruction of a transforming event.

My partner was released from the hospital the same night as the accident. For some reason, they chose not to scan his head. He was anxious to get home, was talking and fairly mobile (though not easily, he was quite sore!), so I didn’t argue with him. He was lucid and speaking with the doctors, so I was really there as support, not as a decision maker. I got him home and settled in, and breathed a huge sigh of relief. Unfortunately, over the following 5 days, he declined. I kept urging him to get a head scan. We could go to another hospital, his symptoms were worsening, not getting better, and they would doubtlessly order the scan. I finally convinced him, and we discovered he had a skull fracture and needed a craniotomy. He was rushed to a hospital where world-renowned neurologists worked and had the surgery that night. My nagging saved his life. It was the scariest time of my life.

He spent several days in the hospital recovering from surgery. He was immediately better after and improved more every day. By the time we got him home, I noticed some blisters on my right hand. I figured I had been gripping the gear shift on my car too tightly during all my trips back and forth to visit him in the hospital. With him home, and his parents in from out of town to help tend to him, I returned to work. I remember showing my blisters to a co-worker and describing the harrowing 2 weeks I had just survived.

The next morning, my arm was red and my elbow was sore. I immediately intuited that I had shingles. I called my father, who has had shingles, and asked him if he thought this was a possibility. He urged me to go to the doctor, advising me that I could be prescribed medications to help shorten the duration and deal with the pain. I complied, and though the doctor didn’t initially agree it was shingles, upon hearing about my stressful experience, agreed. I was given medications and sent home to recover. The stress I had endured and ignored while I tended to my beloved’s health had ignited this outbreak. It was my own fault. I hadn’t been eating or sleeping well, I hadn’t been performing self-Reiki, I hadn’t been thinking about anything but him. How could I have?

I took my medications, recognized my role in the onset, and eventually recovered. Then I got strep. Then I got mono. Then I got a cold. Then I got Bell’s Palsy. So what happened? How did I get so far off center? I’m not unique. This happens to people all the time. They have a serious event that knocks them off kilter, and they have trouble finding their way back into themselves. They treat symptom after symptom, never acknowledging that the problem is that their energies simply aren’t aligned with well-being. It’s so easy when you feel fine, right? It’s much harder to do all the self-care needed to stay in the zone when you feel crummy. Somehow I had gotten myself stuck in this negative vibration and it was wreaking havoc on my life and health.

I truly thought I had gotten back there just before I got mono. I was doing self-Reiki daily, I was feeling ok, but I never got myself back to that pre-accident place where I felt and believed in my soul that I had a good life. I was subconsciously waiting for the other shoe to drop. And it was altering everything. My relationship was crumbling, my health was failing, I couldn’t catch a break. I wasn’t feeling hopeful.

By the time Bell’s Palsy came on, I was healthy as can be on paper. All my lab work was great. With the exception of high blood pressure (red flag, anyone?), I was a picture of health. On paper. But in real life, I was a mess. I faced a move I was unprepared for, an eminent separation from my beloved, a lot of financial uncertainty, and a whopping helping of fear. However, Bell’s Palsy was the best thing that could’ve happened. Since an MRI confirmed I wasn’t having a stroke and didn’t have a blockage, I knew I was healthy. I just had this inflammation that was affecting my facial nerve. It is temporary and didn’t make me feel sick or miserable (other than the frustration of having half my face paralyzed). And it was kind of amusing for me. I look and talk funny, but I’m still me inside. This was the gift of Bell’s. I was able to be light about an affliction. Where the mono wiped me out and I had no energy for anything, this didn’t change how I felt physically. I could still work and do all my normal daily tasks. And since it is temporary, and since I had a firm diagnosis from the start, I could relax and find hope that when it passes, I’m going to be all right. This hope was the Goo-Gone I needed to help clear out all that sticky negative energy I’d been hauling around for months. There were no more unknowns. I had done all the tests, I had seen all the results, and everything was good. There was no shoe to drop. Hope is a small shift, which leads to a bigger shift, which helps you get back to center.

I love reading and listening to Abraham-Hicks. This is a major message from those teachings. You have to choose the better feeling thought. Not the best feeling thought, because maybe you’re not able to see that in the middle of your struggles. I certainly couldn’t feel grateful when I was desperately waiting to hear if my partner would survive his surgery. But I was hopeful. And that was all I could muster at the time. While I laid suffering from mono, barely able to drag myself out of bed, I couldn’t feel appreciation for the “vacation” I was on. I wondered if I would even survive. So it would have been asking way too much to demand those thoughts to occupy my mind.

On the spectrum of thoughts and feelings, hope is kind of a low-hanging fruit. It’s easier to reach for when you’re feeling down and desperate. But the whole point of this post is to encourage you to go ahead and reach for it. It’s ripe and ready for you, and taking it can lead you forward into the higher and better feelings and thoughts. You have to start somewhere, and you have to start where you are, because you can’t start where you want to be if you’re that far away from it.

My partner has made a full recovery. As I write this, I still have the Bell’s Palsy, but I am feeling well and I am actually grateful for having it. It has allowed me to grow in ways I didn’t realize I needed to grow. It has connected me to people who have had it, and we have shared experiences, and their complete recovery has reassured me that everything is ok. So I’m not just hopeful – I’m beyond. But it all started with hope.

If you’re going through a hard time, please reach for hope. It will feel better to you than any desperation or fear or panic you may feel. It will set you off on the right path to wholeness and centeredness, which is where you will again become invincible. 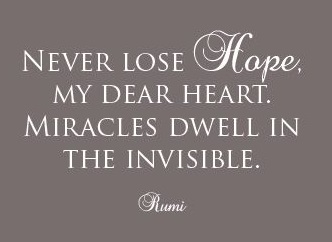 I always welcome your shared stories and experiences. Reach out to me, and let me know what you’re going through, or how you overcame the obstacles that were placed in your path.

With much love, light, and gratitude,
Jen